Michael JohnsonPosted on Posted in Blog — No Comments ↓

Stegemann’s reconstruction of column 7 of 1QHodayota is complex because the fragments are placed using different kinds of evidence: some fragments are placed on the basis of a material joins or textual parallels, while others are placed solely on the basis of shape. This blog post will explain how Stegemann reconstructed 1QHa col. 7 and his reasoning for placing each fragment. Unfortunately, I cannot display copyrighted images of col. 7 itself, but a contour drawing of the column is sufficient to show where Stegemann placed these fragments in the column. 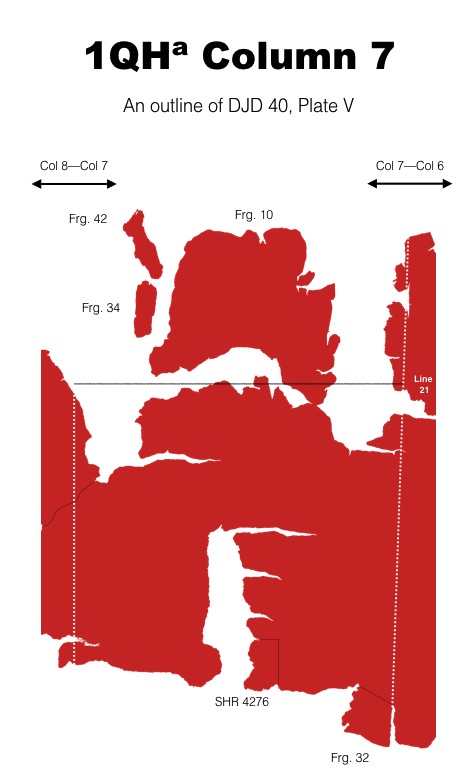 Stegemann’s col. 7 is composed of several fragments of various sizes, most of which are undisputed. Much of the surviving material is a large fragment extending from the left edge of column 6 to the right edge of col. 8. Two other large pieces from cols. 6 and 8 also contain text from the right and left edges, respectively, of the writing block of col. 7. Other smaller fragments have been added to these large pieces of the manuscript. At the bottom-right of the column, frg. 32 has been placed without any textual parallel because its top and right edges neatly match the manuscript’s edges; thus, we have a material join. Similarly, SHR 4276 was added by Émile Puech on the basis of another convincing material join.[1]

The fragment placements at the bottom of the column are uncontested; however, the placements of frgs. 10, 34, and 42 are more tenuous. Unlike frg. 32 and SHR 4276, these fragments cannot be physically joined to the rest of the column nor is there a helpful textual parallel that ties them to this location. Stegemann placed frg. 10 in the middle of the upper half of the column because he expected there to be a piece of manuscript roughly that size in that location in light of the contours of the damaged remains of the upper parts of cols. 5–6. Stegemann considered the case for placing frg. 10 to be strong enough that it could, “be proposed with some confidence,” despite the lack of a material join.[2]

The Textual Parallel in 4QHodayota

4QHa contains the only overlapping text for frg. 10, but it does not yield any evidence that allows us to link frg. 10 to any part of col. 7. Although 4QHa allows us to place frgs. 34 and 42 just to the left of frg. 10, it does not shed light on where this cluster of fragments should be placed in the manuscript. Another possibility is that the fragments come from cols. 1–3, for which we have only a handful of small, tentatively placed fragments. These columns are the only other part of the scroll that could accommodate such a large cluster of fragments. They could not fall anywhere in the latter columns of the scroll because a second scribe began copying midway through col. 19, and the handwriting on frgs. 10, 34, and 42 belongs to the first scribe. In sum, the cluster of fragments constituted by frgs. 10, 34, and 42 has no material join or textual links to col. 7, and it is only placed there on the hypothesis that it completes a pattern of damage that this scroll sustained while rolled.

He reconstructs the following:

Brackets enclose the part of the text that Stegemann is reconstructing, and circlets are placeholders that denote traces of letters that are too faded or damaged to read.

In another publication, he claims that “[t]his [reconstruction] would fit the gap perfectly,” though he also allows for the possibility that another similar “blessed are you” formula may have been used.[3] But does this textual reconstruction fit in the space between the fragments? And does it create a text that has precedence in other Dead Sea Scrolls compositions? Moreover, there is also the larger question of whether the placement of frg. 10 in col. 7 solely on the basis of its shape is warranted. If frg. 10 is incorrectly placed, then Stegemann’s textual reconstruction of line 21 is almost certainly inaccurate.

In the next post, I will discuss some of the reasons that scholars have regarded the placement of frg. 10 in col. 7 to be problematic, and why Stegemann’s textual reconstruction is almost certainly not possible on the basis of insights drawn from my project at the Sherman Centre for Digital Scholarship.

Hartmut Stegemann. “Methods for the Reconstruction of Scrolls from Scattered Fragments.” Pages 189–220 in Archaeology and History in the Dead Sea Scrolls: The New York University Conference in Memory of Yigael Yadin. Edited by Lawrence H. Schiffman. JSPSup 8. Sheffield: JSOT, 1990.