I’m a PhD Candidate in the department of history and an incoming Graduate Fellow at the Sherman Centre for Digital Scholarship. You’ll be hearing from me a lot this year, so in this post I’m going to 1) introduce my dissertation research and 2) talk about the digital humanities project I’ll be conducting over the next eleven months in the Centre. I’ll be writing regularly about my progress on this project on the SCDS blog, so stay tuned!

My doctorate dissertation (“Ecologies of Gold: Global Mining, Canadian Industrialisation, and the Porcupine Gold Rush, 1909-1929”) examines the influence of international mining science on Ontario’s early industrial resource economy. I see the 19th century gold rushes in California, Australia, British Columbia, New Zealand, South Africa, the Yukon, and Northern Ontario as a single environmental event rather than a series of isolated national incidents. I argue that global trade, diplomacy, scientific networks, and individual travelers facilitated the flow of mining knowledge globally, and applied it everywhere from the Australian jungles to the Canadian arctic.  This process was rarely smooth: Non-human nature forced adaption from miners on every continent. Using the Porcupine gold rush in northern Ontario as a case study, my research explores the challenges local environments posed to an imported body of 19th century gold mining methods – and the way that those challenges shaped our modern relationships with nature.

This research builds on previous work conducted at the University of Northern British Columbia, where I wrote a Master’s thesis on First Nations history at the Barkerville gold rush (It Happened to Me In Barkerville: Aborginal Identity, Economy, and Law in the Cariboo Gold Rush, 1962-1900). As someone who grew up in a historic mining community, I see my work as contributing to discussions around environmental justice related to mining in Canada and around the world. If you want to know more about my topic, I recently wrote a blog post on it for the Network in Canadian History & Environment.

As a historian, I primarily rely on archival documents for evidence including newspapers, corporate records, government records, geological surveys, and scientific publications. Over the past decade, archivists and librarians all over the world have digitised hundreds of thousands of these sources. To get a sense of how fast digitisation happens: back in 2011 when I wrote my MA thesis, I had to go through every year of the Cariboo Sentinel newspaper on microfilm scanning visually for articles related to First Nations involvement in the gold rush (finding aids existed, but did not include First Nations people). Now, the Cariboo Sentinel is fully digitised. And its not the only one. Hundreds of gold-rush era primary documents are now easily available on websites like Trove, Papers Past, and California Digital Newspaper Collection (to name a few of my favourites). The digitisation of mass amounts of historical material denotes a new era for historical research requiring new skills, new tools, and new methods of analysis. The global scope of my current project (which aims to be a transnational history of gold rushes) would be impossible without this boom in digital source material around the world.

My research involves the use of a variety of digital tools and methods of analysis, but this year I will be focusing primarily on a Historical Geographical Information Systems (HGIS) project with the help of the staff and resources in the Sherman Centre. Last year I attended DH@Guelph and the Digital Humanities Summer Institute where I learned how to use ArcGIS and QGIS software. As a result I was able to generate a series of overlays showing change over time on the local landscape at Porcupine, like this one.  This is a 1911 map showing claims and waterbodies overlayed on modern satellite imagery. Note especially the changes to local lakes (and in some cases the appearance of whole new ones!) apparent here. 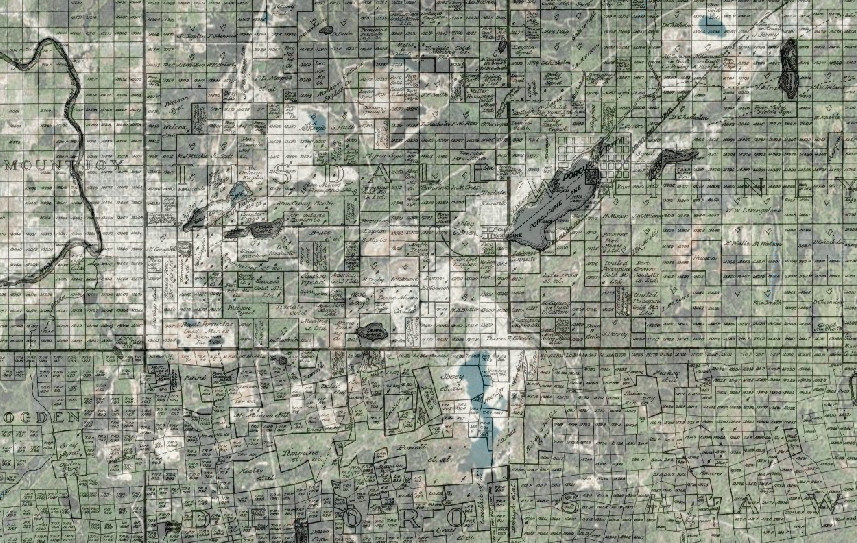 Ecologies of Gold: A Flow Map of the Nineteenth Century Gold Rushes:

This year I’m embarking on a new mapping project: I’ll be generating a flow map of people, goods, and ideas moved between gold rushes in the late 19th and early 20th century.

For example, in the 1920s Dome Mining Company bought three “snow motors” from a Ford plant in Chicago. The motors were shipped to Toronto (where they featured in a photo op with company executives) before getting shipped to Northern Ontario.

The snow motors are an example of a moved “object,” but there were also moved people: Edward Hargraves, the man credited with setting off the first gold rush in Australia, participated in the California rush before heading back to his home country to look for gold using the techniques he’d learned overseas.

There were also moved ideas: The notion of a “motherlode” was first used by geologists in California before being applied to the South African rand.

My list of objects, people, and ideas won’t be exhaustive – cataloguing every moved thing in the 19th century would be a herculean task! However, I hope it will show broad directional flows and provide a starting point for further analysis.  I’m interested in questions like: Are there certain people, goods, or ideas that travel more easily than others over international borders? What time periods saw the most exchange? Were some gold rushes more influential than others in terms of exports?

Here’s a rough mock-up of how I imagine it will look. Made in MS Word.

There are still come kinks to work out – this map is visually confusing, and I already know its going to be a thousand times worse in ArcMap. I would also like to find a way to display information for individual objects, so we know what they are – to me the details are the most interesting part!

Once I have generated an ArcMap file, I’ll be able to zoom in and out to examine “lines” of influence more closely, and identify particularly interesting trends in gold rush movement. I’ll also be able to generate publishable maps using ArcMap’s layout function to share with others online, at conferences, and within the community. Depending on how much time I have/how well this project works, I can always expand it with more data later on. I may also add a change-over-time component.

I am looking forward to what the data can tell me! I hope you’ll follow along on my DH journey this year.