As an extension to my dissertation, this project stems from a long-standing interest in global health outreach, gender studies, and public health policy. Successful public health policies rely on a deep understanding of the various health beliefs that underpin health behaviors. This pilot project will be an interactive online archive of health beliefs that underpin the various anti-vaccine movements around the world. This project will draw on Arthur Kleinman’s 1978 anthropological framework of the internal structure of the health care system (Figure 1), of which are three belief systems that influence our health practice of choice: First, the “professional sector” represents modern/Western medicine (e.g., hospital care, medical school trained physicians, immunization; concepts used include: evidence-based, diagnosis, treatment, prescription, prognosis), second, the “popular sector” represents contemporary influence (e.g., friends and family’s health beliefs, popular celebrity health claims, advertisements of health practices, internet dietitians, naturopaths, homeopaths, including an array of contemporary false claims such as “vaccine toxicity”, “immune overload”, “adrenal fatigue”, etc), and the “folk sector” represents traditional healing and wellness practices (e.g., healing, spiritual healing, natural healing, etc). These 3 belief systems can overlap, compliment and/or conflict with one another – thus, an implementation of successful public health policies are dependent on a deep anthropological and phenomenological understanding of the lived experiences of the population. 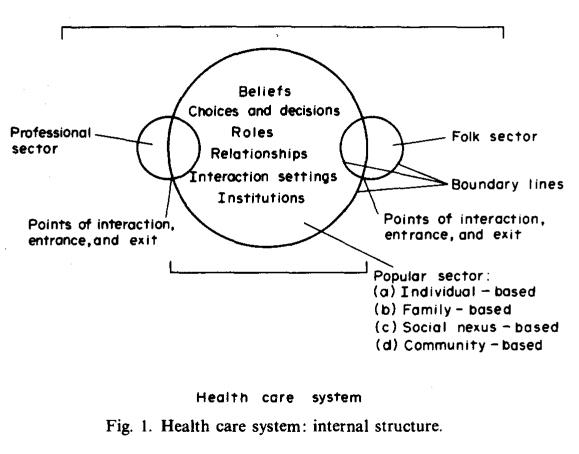 An example of the importance of documenting health beliefs is the case of low polio vaccine coverage rate in Nigeria where polio is endemic – there is currently widespread belief that polio vaccine is an American bio-weapon that sterilizes the Muslim population as a form of mass genocide. Similarly, in Japan where cervical cancer remains prevalent, HPV vaccine coverage rate remains at 0% due to rumours of HPV-vaccine induced anaphylaxis that is promoted by major media that lead the Japanese government to defund HPV vaccine due to low public interest in the vaccine.

Over the course of the next 9 months, I will produce an interactive map that would document health beliefs that impede vaccine efforts. A sample webpage is “Healthmap” (Figure 2), and the sources of documents are similar to that of “The Vaccine Confidence Project”. The former website documents infectious diseases and outbreaks through active surveillance (e.g., outbreaks are collected by mining keywords of specific diseases from select media on the web and then added into the registry) and passive surveillance (e.g., outbreaks are “added” by the public, usually health practitioners and Centers for Disease Control professionals and verified by the web owner). The latter website was established in 2013 to collect news and published articles on vaccine hesitancy. The “Atlas of Vaccine Hesitancy” will help researchers navigate health beliefs prior to implementing any immunization policy. It fills the gap of documenting health beliefs that underpins vaccine refusal in an easily retrievable way online, and it will be allow submissions of new entries from researchers, health professionals, and the public.

Here comes the rambling. The system architecture of the “Atlas” should be pretty straightforward, it has a web frontend, a web backend, a data repository, a classification engine, and a crowd-sourced data acquisition API.  But here comes the problem – most of the maps I am talking about have million-dollar grants, with teams of 6 people. I am one person, with no research grants (Sherman Centre does provide grants for travelling and attending conferences for residences, but that’s aside the point). Because I’m not a programmer nor a GIS specialist, I’ve been playing around with map-making software for the past two weeks that allows me to not have to program, and hopefully get a sense of what option best suits my needs. We’ll go through the process of how this map is going built, for anyone who might be interested.

One of the easiest ways to build a crowd-sourcing map is using Story Maps developed by ArcGIS. To be able to use Story Maps, you will need an online ESRI account. An example of Story Maps is “Faces of Opioid” (See Figure 4), anyone from the public can contribute to the map by clicking “Add Lost Loved One” and upload a picture to the map. This is the first idea. There is no better way to create maps than ArcGIS, it is powerful, intuitive, has a rich online resource database for case-based learning, it also reads and exports all sorts of files (xls, json, csv) and from the cloud (Dropbox, One Drive, Google Drive), but it’s not free ($100CAD/yr for students). And I love free. So, I looked about for other map making tools.

The second way to make maps and populate them is by Tableau. This one isn’t free either, but it is for students. There is no better way to make great beautiful looking graphics and charts than with Tableau, I have heard the director of Ryerson University’s Social Media Lab director Anatoliy Gruzd call it “Excel on Steroids” – and it is pretty much that. There’s functions to chronologically present your map, but it’s not built for crowdsourcing. The third way to build quickly build map is using Infogram, which allows you to populate the map by yourself – it’s pretty popular with infographic makers, and the interface is easy to use.

There’s also the possibility to build the map using Google My Maps. And after tinkering with it a bit, I found it to be the most customizable for crowd-sourcing and for input from my end into the repository. But I have not completely given up on Story Maps yet.

Before I sign off, I just wanted to share a site called Disease Map, which allows you to contribute to pinning your chronic or hereditary disease on the map, and connect with others with the same disease online. Figure 4 shows people with Anemia who have pinned themselves on the map.

I’ll be returning to show you the constructed Atlas in a few months’ time.

Currently Health Policy PhD candidate at McMaster University and incoming Sherman Centre Digital Scholarship Residence for 2017-2018. I’m here to build an interactive crowdsourcing map called “The Atlas of Vaccine Hesitancy”, a project that will document and trace health beliefs around the globe that contributes to vaccine hesitancy. Cares about health for all. BSN, RN, MS in Public Health Policy and Management, GradCert in Global Health and HIV/STI prevention. Twitter @MelodieYJSong