Transboundary waters shared by Indigenous Nations, US and Canada.

Aquay (Hello), I am a PhD student in Comparative Public Policy in the Department of Political Science focusing on Indigenous water security and its climatic, territorial and governance underpinnings. I am an enrolled citizen of the Shinnecock Indian Nation, a federally-recognized Tribal Nation located on the southern shores of Paumanok (Long Island, NY). Shinnecock means “People of the Shore” and as Coastal Peoples water is integral to our cultural identity and survivance.

However, I am still often asked “Why Water?” essentially probing my personal and professional background to uncover the key moment in my life when I was inspired to become a scholar/activist in such a niche area of Academia. But, such a question is gilded with legacies of inherited colonial intellectualisms that erase Indigenous epistemologies of caring for water since time immemorial. Despite the frustration in having to answer these inquiries, there is not one moment I can pull out of the pages of my life and say “That’s when I knew I wanted to be …”

Was it at six months of age when I had placed my feet in both the Pacific and Atlantic Oceans? Or the history of ground water pollution on our Indian lands leased to Long Island settlers for potato farming after late blight had devastated crops across the big waters? Or the insufferable failure of access to adequate water infrastructure and sanitation on our reserve when across the bay sat the Meadow Lane mansions of the Hamptons?

Time is not linear. There is no one moment that changes our course as Indigenous Peoples on Turtle Island. It is a collection of moments past, present, and future buried deep in our “blood memory”[1] that shape our response for collective action grounded in sovereignty and self-determination.

With modern Indigenous movements like #NoDAPL and Idle No More the world is gaining greater understanding of the politics of protecting Indigenous waters for current and future generations. However, as Indigenous Peoples we have always known that we are the miner’s canary. In 1953 Felix Cohen is famously quoted using this metaphor:

Like the miner’s canary, the Indian marks the shifts from fresh air to poison gas in our political atmosphere; and our treatment of Indians, even more than our treatment of other minorities, reflects the rise and fall of our democratic faith.[2]

This is the great test of the 21st Century. Will the world continue to let Indigenous Peoples’ suffocate as it mines to satisfy insatiable greed or will we heed the canary’s cry? As Indigenous Peoples, we are on the frontlines of climate change. We are climate refugees, losing our first foods, lands and waters to ongoing processes of colonization. Elizabeth Ann Kronk Warner, a legal scholar, argues that nation-states, such as the United States, are violating Indigenous treaties through their climate change inaction. The treaties are often bounded in language tied to natural elements and waterscapes captured in phrases such as, “so long as the rivers flow”. But what if anthropogenic climate change and hydrocolonialism[3] make it so that the rivers run dry? Every failure to act on climate change is a renegement by colonial states on commitments made to Indigenous Nations and guaranteed in Treaties.

If the United States and Canada are to carve a true path towards reconciliation then they must recognize the intellectual inheritances that perpetuate ongoing acts of colonization. As a Graduate Fellow at the Sherman Centre for Digital Scholarship, I am working to dismantle archaic forms of knowledge production, which privilege Western science over Indigenous Knowledge. In particular, my research examines how maps have been used to erase Indigenous Nations from the geopolitical scales of transboundary water governance.

A large part of the world’s freshwater resources are contained in river basins and groundwater systems that are shared by two or more nations. As climate change is expected to raise the number of extreme situations of flooding and drought, both in frequency and in duration, transboundary management of these water resources becomes more essential to reduce the impact of these extremes.

The disenfranchisement of Indigenous Nations from transboundary water governance is rooted in legacies of colonialism that are no more apparent than in the physical erasure of Indigenous Peoples, places and languages from basin maps. Rivers and lakes do not respect political boundaries and yet they are often the basis for them. The dominant water regime has politicized our water relatives and removed Indigenous Peoples from our traditional stewardship roles. However, my research is not solely on the colonial project rather it examines the ways in which Indigenous Nations resist and build resilience for future generations. We are still here. We are resilient. We cannot be easily erased. Therefore, my digital scholarship aims to digitize the work of Indigenous Nations and our water protectors as they fight to (re)claim inherent sovereign rights to govern our waters.

In 2014, this map of the Columbia River Basin (CRB) was developed by the Columbia River Inter-Tribal Fish Commission (CRITFC). It is the first transboundary basin map to equitably represent Indigenous Nations across the US-Canada border in the management of the CRB. 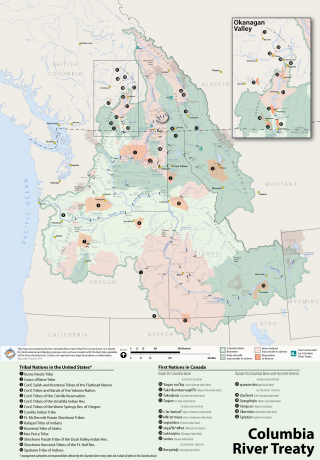 Comparatively, there is not a representative map for the other basins across the US-Canada border notably not even for the Great Lakes – St. Lawrence Basin (GLSLB). However, there are digital efforts to decolonize maps, such as Decolonial Atlas, which created the following map of the Great Lakes in Anishinaabemowin.

Indigenous Nations are (re)constituting water governance institutions across political scales through geospatial mapping efforts. Indigenous water institutions combat hydrocolonialism and reject labels of Indigenous Peoples as “stakeholders” in the management of transboundary waters. We are Nations, not stakeholders. As Indigenous Nations we have inherent rights to self-determination and sovereignty guaranteed under treaty and international law through the United Nations Declaration on the Rights of Indigenous Peoples (UNDRIP). Specifically, Article 25 of UNDRIP states:

“Indigenous peoples have the right to maintain and strengthen their distinctive spiritual relationship with their traditionally owned or otherwise occupied and used lands, territories, waters and coastal seas and other resources and to uphold their responsibilities to future generations in this regard.”

Violations of treaty and international law denying Indigenous water governance is at the heart of the Dakota Access Pipeline conflict. The U.S. Army Corps of Engineers (USACE) continues its legacy of hydrocolonialism by violating the inherent sovereign rights of Tribal Nations to protect our waters for future generations. The decision by USACE to route the pipeline less than a mile upstream of the Standing Rock Reservation is a defilement of treaty law, specifically, the 1868 Fort Laramie Treaty.

Furthermore, the Dakota Access Pipeline is a violation of international law under Article 32 of UNDRIP whereby Indigenous Peoples have the right to free, prior, and informed consent “prior to the approval of any project affecting their lands or territories and other resources, particularly in connection with the development, utilization or exploitation of mineral, water or other resources.”

Despite the ongoing acts of hydrocolonialism there is strength in the resilience of Indigenous water institutions to advocate for change and protection of the waters. Indigenous water institutions have: (1) an identifiable role in governance of transboundary waters; (2) develop in response to the exclusion of Indigenous Peoples and or Indigenous ecological knowledge from the dominant water regime; (3) incorporate Indigenous epistemologies of the basin and maintain a holistic approach to resolving water insecurity through their chosen management practices; and (4) bring together Indigenous Nations for a relational voice in water governance.

Indigenous Nations face severe impacts of historical trauma resulting from acts of hydroclonialism like the Dakota Access Pipeline. These events are not new. In fact, they repeat a systemic colonial practice of removing Indigenous Peoples from our lands and waters. The image below is from 1948 of George Gillette, the chairman of the Mandan, Arikara, and Hidatsa tribes of North Dakota, crying at the Garrison Dam signing that flooded ancestral lands and burial grounds under the direction of the Flood Control Act of 1944.

It is said that one act of violence takes four generations to heal. Yet, how can we heal if acts of violence against Indigenous waters remain constant? If we are to set ourselves on a shared path towards reconciliation and transformative healing for Indigenous Peoples we need our rights to govern our waters as we have since time immemorial to be respected. Indigenous water rights are not just about adequate quantity and quality of water. Water is sacred. It is our first medicine as we are carried in the womb. It sustains us and throughout our lives it restores our balance. As Indigenous Peoples our ceremonies and cultural survival are integrally linked to the health of the water. The water remembers – and so do we as its caretakers. Water is a living repository of our shared existence, holding memories of song and prayer in safekeeping for future generations.

Digital scholarship can aid Indigenous Nations in our efforts to decolonize water governance regimes and enhance coordination for the management of transboundary waters. During my tenure with the Sherman Centre I will endeavor to explore digital tools that aid these efforts for equitable water governance. The project will develop an online toolkit, or data portal, that consolidates available data on extreme climate events and water security issues affecting Indigenous Nations in the Columbia River Basin and Great Lakes-St. Lawrence Basin.

Indigenous Nation Profiles – The project will create water governance profiles for each Indigenous Nation in the CRB and GLSLB basins. Profiles may also be added as clickable layers of the mapping project to explore Indigenous water security issues including frequency of extreme climate events faced by each nation. (Examples include: http://tribalclimate.uoregon.edu/tribal-profiles/; http://www.bia.gov/WhoWeAre/BIA/climatechange/Resources/Tribes/TribalFactSheet/index.htm) The project will differ from the examples presented in that it provides a cross-border comparison of all Indigenous Nations in the basins not set solely within the Canadian or American context as previous research has done.

In the coming months, I look forward to sharing my research with you as we work to highlight innovation in digital scholarship and open data across Turtle Island for water governance. As Grandmother and Water Walker Josephine Mandamin says,

“I will go to any lengths to and direction to carry the water to the people. As women, we are carriers of the water. We carry life for the people. So, when we carry that water, we are telling people that we will go any lengths for the water…”

The blogs I will share with you are a digital (re)imagination of our water walks crossing digital divides grounded in Indigenous epistemologies of caring for water. We are the carriers of tradition. We are water protectors. Water is Life.

[1] A term coined by N. Scott Momaday in House Made of Dawn.

[3] Hydrocolonialism refers to processes of colonization whereby Indigenous Peoples are (1) disenfranchised from the dominant water regime; and (2) waterscapes are territorialized based on geopolitical scales that fail to recognize Indigenous sovereignty, stewardship, reciprocity, and responsibility of caring for water.

Kelsey Leonard is a PhD student in the Department of Political Science at McMaster University. She is the Philomathia Scholar in Water Policy and studies the climatic, territorial and governance underpinnings of Indigenous water security. You can find her on twitter: @KelseyTLeonard