This spring, environmental historians from around the world gathered in Columbus, Ohio for the American Society for Environmental History’s annual meeting (ASEH).

The historical discipline has a complicated relationship with digital techniques dating back to the high optimism around cliometrics in the 1980s and subsequent virulent debates around the merits (or lack thereof) of quantitative history . I can’t begin to answer “why” here – there’s whole books written on the subject. But suffice to say that the result has been a rather uneven adoption by historians as a whole.

Traditionally, ASEH does not have a strong digital showing. This year, a search for “digital” turns up a single paper (which mentions media as part of a broader argument about the historical roots of youth activism on the issue of climate change).  ASEH is not alone in this regard – here in Canada, the Canadian Historical Association (CHA) has at least one panel devoted to digital engagement as well as a few papers with digital components (check out their program). But as Ian Milligan noted on twitter, the conference has traditionally not accepted and/or attracted much in the way of digital scholarship. 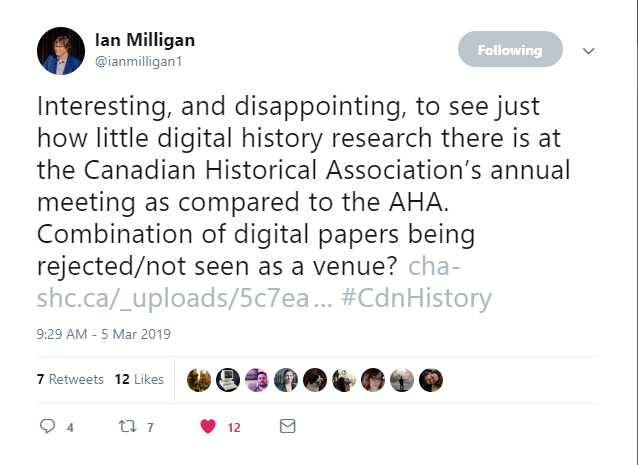 As Milligan points out this is a stark contrast to the American Historical Association’s (AHA) annual conference, for which there were 39 mentions of “digital” in the 2019 program, including many directly addressing the role of digital research and publication in the discipline. And the Network in Canadian Histories of the Environment (NiCHE) has a strong digital bent, including a series of discussion pieces, articles, and a digital tools page. Here in Canada scholars have been particularly open about the strong relationship between environmental history and GIS.

The unevenness of adoption has left gaps in the research – places for opportunities for writing new narratives about the past. My own particular subfield of environmental history is a particularly good example, and this year at ASEH I was part of a roundtable on the “state of the field” of mining history. As part of my remarks, I commented on the future of the discipline. I made 3 overlapping arguments. 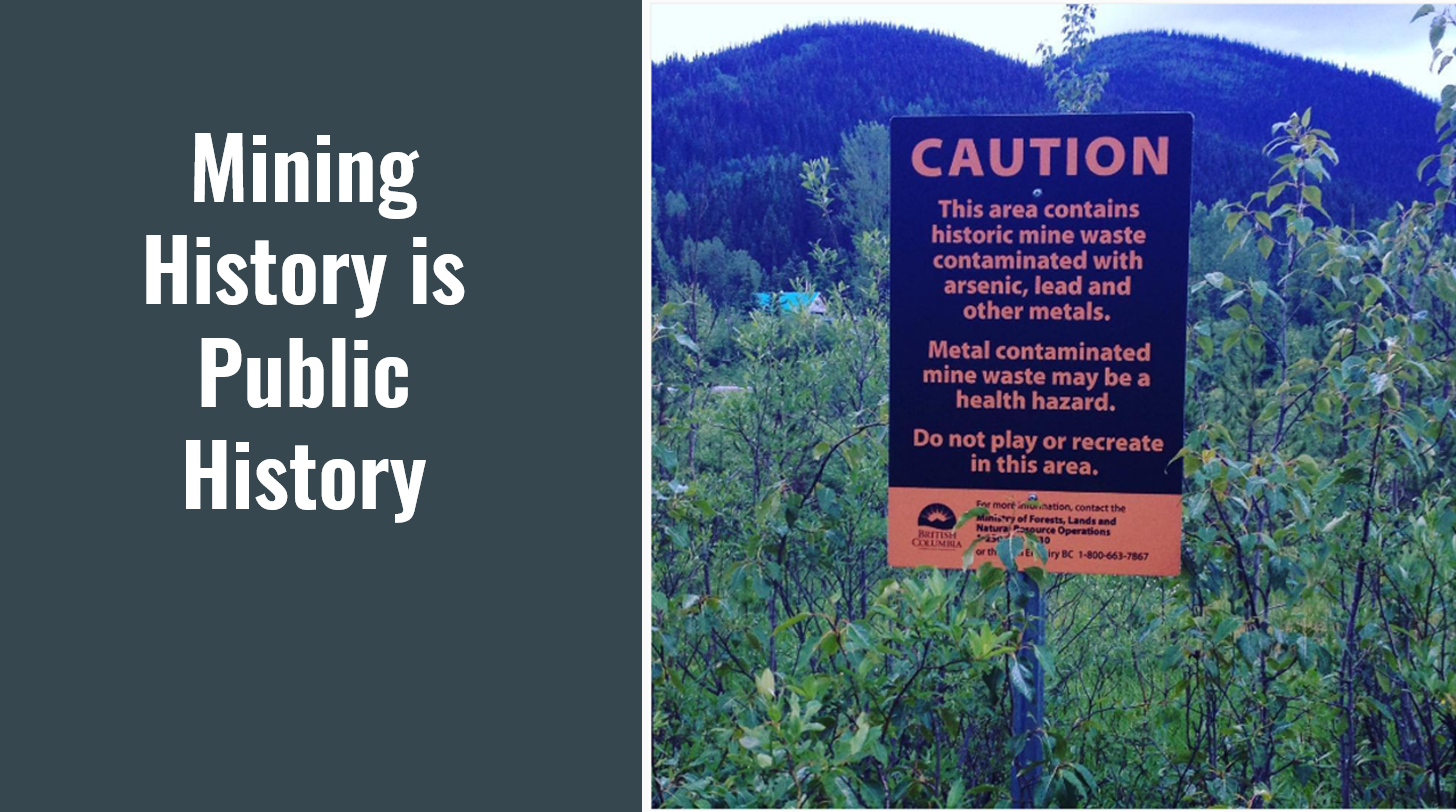 All environmental history has implications for the present, but this is particularly true of mining history. Communities want to know how their predecessors successfully (or unsuccessfully) adapted to extraction. They want to know what strategies have been employed in the past, and how others have protected their interests. Additionally, many communities are dealing with historic mining waste, and mining history can contribute usefully to discussions around management and environmental justice. Mining historians, I argued, need to seek out open and publicly facing platforms for publication. Digital publication provides some strong possibilities for this type of communication. See John Sandlos and Arn Keeling’s edited collection Mining and Communities in Northern Canada – an open publication with the University of Calgary Press, for an example. 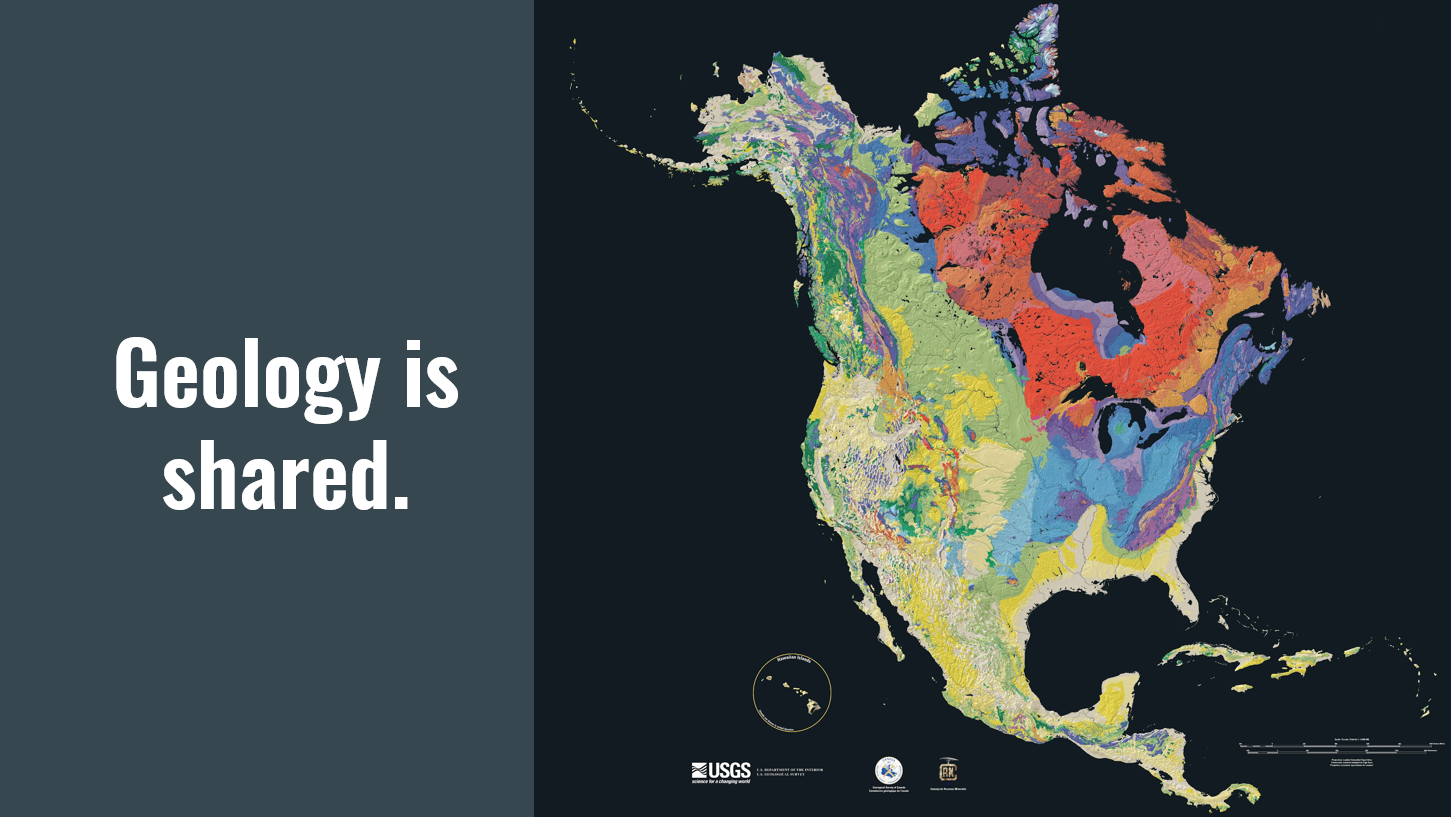 This is actually an argument for transnational history. As I noted in my remarks, we share a very significant variable when it comes to the bedrock under our feet. Historically this has facilitated the successful cross-pollination of science and technology. Mining techniques are broadly applicable in places where rocks are more or less the same. There is danger in taking this argument too far – local soil and fault variation certainly exists. But in my opinion mining history has proved overly localized. Broadening the lens may lead to important new insights. The Australians have led the field in this regard, and it is worth noting that Australian transnational research is facilitated by their excellent digital archives. Trove Australia is a model of digital archiving worth replication.

Argument 3: There is Room for Digital Research 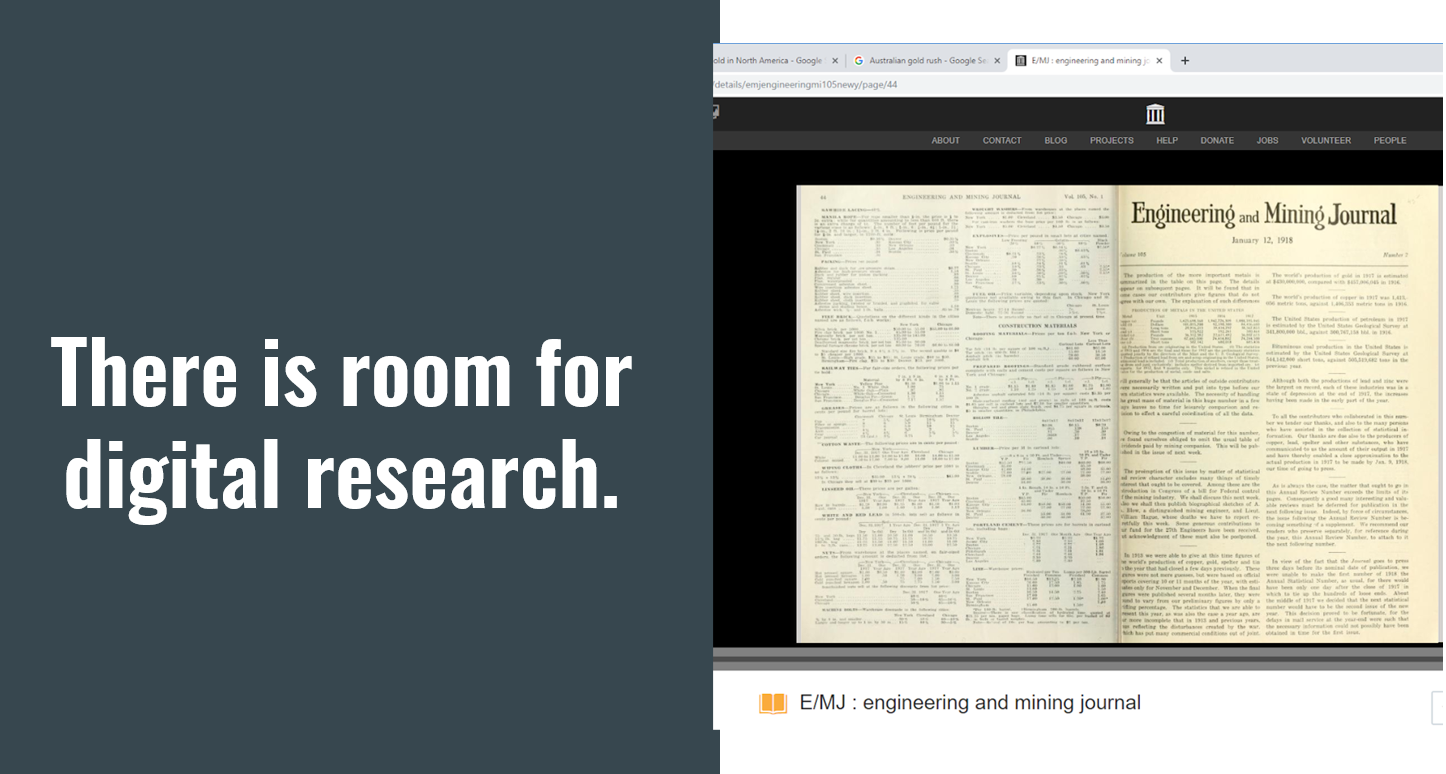 Mining data is structured data, and states have traditionally taken a good deal of care in recording mining activity. There are a plethora of digitized sources begging for analysis. See, for example, the Internet Archive’s collection of the Engineering and Mining Journal. State and provincial archives often have annual reports digitized on their websites, and most large mining companies kept structured annual reports. There is also a large body of scholarly articles dating back to the earliest days of geological research available, many of which are scanned and available through portals like Jstor. And, of course, there is a lot of digitized media available, from digitized newspapers to films and advertising.

I can imagine all kinds of qualitative and quantitative analysis coming out of some relatively straightforward text analysis, topic modelling, or network analysis. It would be possible to answer all kinds of questions about the flow of capital, technology, and human beings through time and space. This sort of work could go a long way in opening up the field and provoking fresh questions.

The future of DH in Environmental History?

ASEH 2020 will be held in Ottawa next year, and I’ll be looking for signs of shift. On Canadian soil and presumably under the increased influence of NiCHE, will environmental historians adopt more a DH-friendly program?

More broadly, how will the historical discipline adapt in an age of informational abundance? Milligan has written extensively about this topic, and his work has already proved prescient. Historians, including environmental historians, must come to terms with their own checkered history if the discipline is to effectively integrate digital techniques into mainstream forms of research and publication. And environmental history in particular has much to gain from engagement with the digital realm.

1 Comment on “DH and Mining History – Lessons from ASEH”