Veronica LittPosted on Posted in Blog — No Comments ↓ 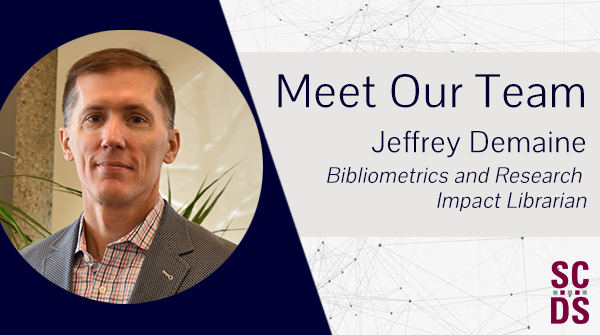 Jeffrey Demaine is the Sherman Centre’s Bibliometrics and Research Impact Librarian. Though Jeff is only in his second year at McMaster, he has already made a tremendous impact in our university, with a steady stream of academics requesting consultations and appointments. When Jeff isn’t helping the McMaster community, he’s engaged in the very meta task of researching research and revealing the patterns that underly McMaster’s academic output. Learn more about our energetic bibliometrician with this quick Q&A.

SCDS: How did you get interested in bibliometrics? To many, it may seem like a niche field.

JD: Yes, most folks in this field fell into it. They were already working in an academic library and applied for a brand-new position in Bibliometrics. In contrast, I’ve planned on doing this for a very long time. My undergraduate was in the History of Science, and it was there that I was introduced to the work of Derek de Solla Price. He was a giant in the field in the 20th-Century and wrote a number of books about the growth and dynamics of science. I pursued a Master’s in Information Science so that I could learn more about Bibliometrics. Amazingly, there is work in this field, although it took quite a few years to carve out this niche.

SCDS: People may think of research impact as only numeric—the amount of times an article was downloaded, the readership of an academic journal, et cetera. But you’re more interested in using numbers as a jumping-off point to find stories about how academic work connects with communities. What’s behind that impulse and why should people shift the way they think of research impact?

JD: Sadly, many people around campus are so busy that they have no time to reflect on the potential for strategic intelligence that a Bibliometric analysis can provide. Instead of counting how many publications we produced last year, we could look for patterns in the metadata that tell us where the research front in a given field is going. Are our researchers contributing to that front? Is that where all the grant money is going? When you are doing Bibliometrics right, the result is new questions, not numerical answers. This gives McMaster’s leadership a much richer view of our research, and allows them to take action.

SCDS: You’re interested in articles that you call “Sleeping Beauties.” Tell us about some of your favourite discoveries while trawling through databases and recovering lost work.

JD: This is a wonderful story to tell. Instead of judging a professor based on some metric, I look for unusual patterns in citation databases. By searching for older articles that had not attracted much interest initially, only to become highly cited decades after publication, one can uncover “Sleeping Beauty” articles. For instance, I discovered a paper written in 1966 by a professor at McMaster named Gert Sabidussi.[1]

It described a way of measuring the centrality of nodes in a social network. Back in the 60’s this wasn’t very useful, as in order to create a social network, an Anthropologist would have to live in an igloo for six months and observe who shared whale blubber with whom. So Sabidussi’s paper was infrequently cited for about 40 years. Then this thing called the “Internet” comes along, and suddenly we have all sort of networks to study. There was an explosion of interest in this paper starting in 2004, and it still attracts a healthy number of citations every year. It is like doing Archaeology on the publication record of a university. More importantly, it is a positive story that celebrates the long-term value of research.

SCDS: This question is a complete gimme—Jeff, tell the people why they should create an OrcID account.

JD: Academics want to be recognized for their research, but it is easy for such credit to get lost. Who knows if Professor X who wrote this paper is the same Professor X who wrote another paper? So Professor X wastes a lot of time typing their publication list over and over. This is silly because computers are not just fancy typewriters: they’re connected! ORCiD leverages the Internet to ensure that publishers, databases, universities, and granting agencies can be sure they are talking about the same Professor X. It amazes me that academics bellyache about having to spend ten minutes to create an ORCiD profile, when it ensures that they will get recognized for their publications automatically.

SCDS: Just for fun, what’s a dream project you’d take on if you had endless time and resources? I seem to recall you wanting to 3D print the Antikythera Mechanism?

JD: Oh, there are so many cool projects we could do, but there’s always another meeting that gets in the way. People don’t realize that this whole new “3D metaverse” that Facebook is creating is actually very old school. When I worked at the NRC a quarter-century ago I used to be one of the top programmers in an ancient language called “VRML”, and I created virtual 3D environments that one could fly through. I am sure that we could leverage the vast Bibliometric datasets we have to create a metaverse of knowledge.

SCDS: Last but not least, I’m asking everyone something about their life beyond work. Tell us something interesting about yourself—anything you like.

JD: I have a distant cousin who is a famous researcher. At age 20, Erik Demaine became the youngest professor ever at MIT. He is Canadian, so we must be related. Sadly, I did not inherit the same smart genes! [2]