Deena Abul FottouhPosted on Posted in Blog — No Comments ↓

Scholars examining  the role of social media in protest disagree about whether social media reflects conditions on the ground. My research examines an important case of social media and protest: the  Egyptian revolution of the Arab Spring and Twitter networks among protestors. The Egyptian revolutionary movement witnessed different phases of solidarity and schism. At the beginning of the revolution in Tahrir Square where people camped for three weeks in 2011 till the deposition of President Mubarak, there was euphoria of unity across different ideological groups. Four years later, one can easily recognize a street that is highly ideologically polarized. My research studies whether the moments of solidarity and schism are mirrored online by looking at how ideology shapes the Twitter network structures of Egyptian activists over time.

The research builds on social movements theory of coalitions emphasizing the role of ideological congruence in movement solidarity (Cornfield and McCammon 2010; McCammon and Campbell 2002; Lichterman 1995; Gerhards and Rucht 1992) and stretches it to the realm of digital activism. Building on the “model change” school of thought in digital activism (Earl, Hurwitz, Mesinas, Tolan, and Arlotti 2013), this research overrides the role played by Twitter as a scale-shift mechanism that helped speed mobilization during the Egyptian revolution. It rather studies its role as an organizational and networking tool by looking at how ideology shaped the Twitter activists’ networks at the beginning of the revolution in 2011 and four years later.  Social network analysis of tweets collected over two different periods of time show that the structures of the mentions networks of the Egyptian activists did match what was happening in the streets. Egypt witnessed a united movement at the beginning of the revolution where heterogeneous ideologies deliberated freely online and formed a common counter-culture. Four years later, the united movement became more fragmented, and that was reflected in the Twitter networks. Sub-group analysis of the Twitter mentions networks show that there was a big core of bloggers of different ideologies connecting to each other at the beginning of the revolution while the later Twitter networks were more ideologically divided. 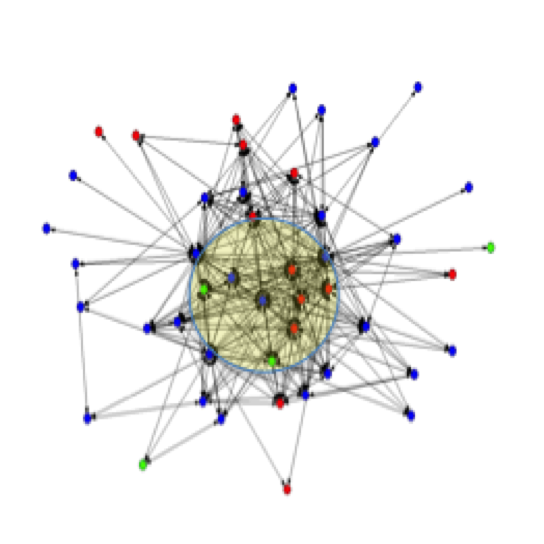 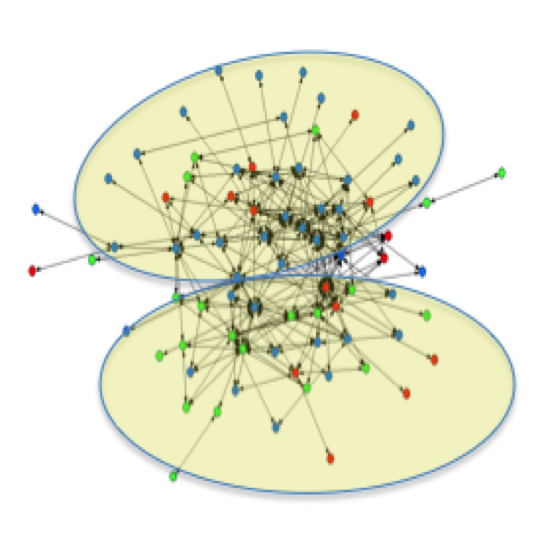 Twitter mentions networks for (a) 2011 and (b) 2014, links are symmetrized. Isolate nodes are removed. Nodes are colored based on ideology; Blue: Liberals, Green: Islamists, Red: Socialists

Ideology started playing a role in determining who mentions whom and the level of homophily of each activist during the later phase of the revolution. This showed in the analysis of network level, group level and individual level homophily.

While other studies which investigate Retweet networks show that the followers of the Egyptian Muslim Brotherhood are more tightly connected and expressing themselves “in unison” than the secularists (Weber et al. 2013), the mentions networks studied in this research show that there was no specific ideological group driving towards homophily at the beginning of the revolution while the liberals were more homophilous in the later phase.

This research shows that Twitter networks are a good barometer of not only protests as previous research shows but also of the patterns of networking and ideological homophily in a revolutionary context that swings between moments of solidarity and schism.

McCammon, Holly, and Karen Campbell. 2002. “Allies on the Road to Victory: Coalition Formation Between the Suffragists and the Woman’s Christian Temperance Union.” Mobilization 7: 231-251.

Weber, Ingmar, Venkata. R. Kiran Garimella, and Alaa Batayneh. 2013. “Secular vs. Islamist Polarization in Egypt on Twitter.” Pp. 290-297. In Proceedings of the 2013 international conference on Advances in Social Network Analysis and Mining ASONAM.

Deena Abul Fottouh is a sociology PhD candidate at McMaster University. She is a holder of the Vanier Graduate Scholarship for her research on Twitter networks of the activists of the Egyptian revolution. Before that, Deena has been working as a Research Specialist with the United Nations Development Programme.